#FTSE #CAC40 Sometimes it’s easy to ignore the glaringly obvious. Once such instance came this morning while GST were trading at 2.22p. Instead of watching the share, prepping to answer a few emails, instead the lack of snow or rain demanded a start be made on our garden furniture, prepping it for summer. After all, it was only -5c outside and keeping occupied, wearing gloves, a particulate mask, a hat, and a set of coveralls would ensure the day was not wasted.

Once everything was ready, the electric sander plugged in, sanity slowly raised its ugly head as it was truly cold, despite the lack of a spiteful Scottish Highlands wind. Rather than admit defeat, rushing indoors to grab a jacket and pull it over the coveralls allowed an attack on the picnic table to commence. By 2.30pm, with GST share price knocking on 2.1p, it was time to concede to the climate and return indoors.

It transpires wearing a waxed cotton Barbour jacket while sanding is remarkably stupid. Worse, the jacket had been re-waxed just a few weeks ago and was now impersonating (successfully) an ‘oak effect’ jacket, dust from the sander adhering quite cheerfully to the country cliché green garment. While discovering the vacuum was not capable of removing the wood dust, my wife came home… Brownie points accumulated by starting a “to-do list” vanished.

Glaringly obvious, from our perspective, for GSTechnologies (previously Golden Saint Technologies) is a trigger level of 2.22p. This company, specialists in so called intelligent buildings with ambitions to become a data centre owner, are experiencing share price growth which visually is reminiscent of an enthusiastic team of folk ‘talking up’ the company prospects in discussion forums. This sort of thing always worries us, thanks to these events usually ending quite painfully for the majority of small, private, investors. It certainly explains a plethora of emails asking our thoughts!

Above 2.22p and things calculate as being capable of some excitement, working out with the potential of an initial 2.6p with secondary, if exceeded, a rather surprising 3.7p. We cannot calculate beyond such an ambition presently and of course, this does not mean a price cannot go higher. It just means we’ve run out of numbers. As always with share prices powered by enthusiasm, it’s worth remembering things can go wrong pretty quickly. Our comments on the $480 share, GameStop last week proved painfully prophetic, the price still reversing and hitting $46 on Tuesday.

Presently trading around the 2p mark, the share needs slump below 1.48 to indicate trouble as this takes the price into a region promoting the chance of reversal to an initial 0.95p. If broken, our longer term (or later that day) secondary works out at 0.53p along with a strong visual argument for a rebound. We cannot work anything out below 0.53p. 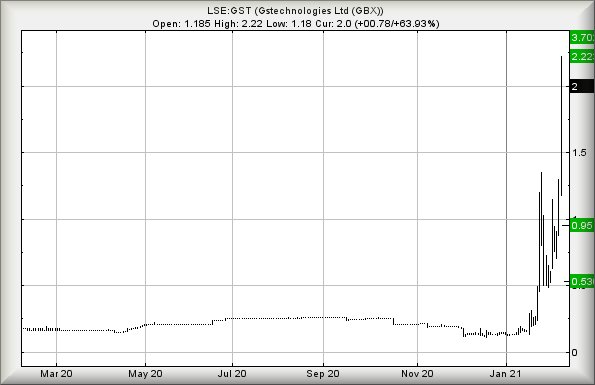