Ferrari #Brent #DAX With arguably the most important date of 2019 fast approaching, it makes sense to review #Ferrari share price. After all, despite the marque tending to fade is last years F1 championship, there appears a chance for optimism in the upcoming date with destiny in Australia, just 6 days away.

To be honest, it appears the markets have lost interest in Brexit, perhaps expecting that particular date to be altered.

As for Formula 1, we wonder whether the upcoming season shall signal the beginning of the end a once popular fortnightly carnival. As Lewis Hamilton pointed out, 8+ million viewers in the UK saw him win his first world championship. But with races no longer broadcast live in many European countries, just over 1 million folk watched him win in 2018. We joke we grudge paying to watch advertising move at 200 mph but there’s an insidious element to this. Teams are doubtless going to find it difficult to attract sponsors, simply because fewer people actually see the adverts.

Due to smaller teams relying heavily on sponsorship, can we anticipate a decline in the number of cars racing? The historic “money hungry” behaviour of Formula 1 has, we suspect, finally started to gnaw on its own corpse.

Ferrari on the other hand appear to be doing something fairly interesting. In the event the share price manages above 135, we’d regard it as entering a cycle to an initial 146. Visually, there’s every expectation of a stumble at such a level, if only due to prior highs. Importantly though, should the price manage close a session above 146, it appears longer term growth to 160 is very possible. This will represent a new, all time high, and a fairly reasonable argument in favour of the team winning a world championship!

Of course, there’s always a chance of things going terribly wrong. In the event the share moves below 123, reversal down to an initial 118 seems likely with secondary, if (when) broken at 111 and hopefully a bounce.

In the next few weeks, we shall obviously pay attention to the Brexit things, giving worst and best case scenario against vulnerable shares. 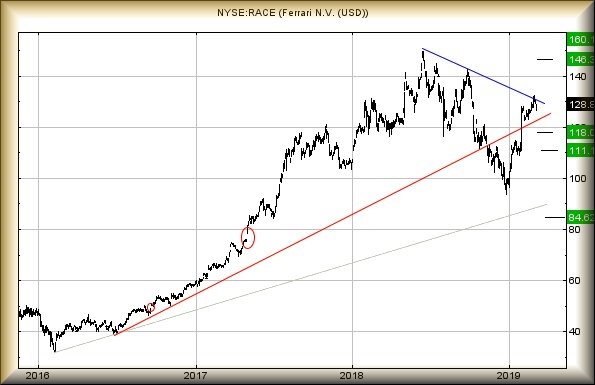