#SP500 #BrentCrude Interviewer Michael Parkinson is to blame for many things, one of them for making impossible to read ‘Barnsley’ without hearing his voice saying it in your head, his Yorkshire accent prolonging the “a”, longer than a soprano holding a low note. Braveheart, despite their pseudo Scottish name and company registration, are based in Yorkshire – probably to escape Scottish weather and hilarious politics. We’ve received more than our fair share of emails, asking an opinion regarding recent share price movements.

Presently trading around 100p, the recent lunge in the direction of 139p proved especially interesting, given the share exceeded any near term logical calculations. We’d an argument favouring 133p as a potential ceiling, a level at which any rise could be expected to hesitate. Despite the price failing to actually close a session above our 133p target, instead topping out at 128.5p, we’re curious as to its future. Since the price achieved 139p, reversals adhered pretty firmly to our conventional “stutters” logic and create a situation where we can relatively easily pencil in a trigger level which should be capable of provoking further gains.

Above 123.5p looks like the starting gate, ideally capable of promoting a gain toward 147p next. Despite this sounding pretty significant and exciting, there’s a more important detail with its roots back in 2007 when the listing launched. Above 147p and it becomes easy to speculate on continued growth to 172p, virtually matching the launch price before it all went wrong and the financial crisis gave the share an absolute kicking. In the future, closure above 172p will be defined as game changing with 227p becoming the next viable target level.

The share would require a retreat below 80p to suggest against painting your face blue and shouting “Freedom” in a Mel Gibson voice, thanks to the threat of reversal toward 34p… 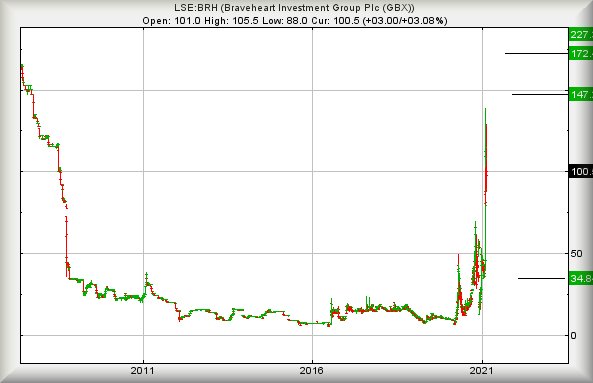