#FTSE #GOLD Gold’s behaving like a ramped AIM stock. When we gave our (astoundingly accurate) Gold prediction on 24th June, we anticipated some hesitation around the 2055 level. We did not expect the hesitation to last for just 22 hours and only provoke a 25 dollar reversal before climbing. But that’s what happened, the precious metal again attaining another all time high on Thursday 6th August.

So what’s next, given Gold has managed to exceed our 2055 level? Is the metal about to leap upward to the 3000 dollar level as some remarkably lunatic analysts are predicting. We’re forced to be a little optimistic now as above 2070 now looks capable of a further rise to 2093 dollars. If bettered, secondary calculates at 2165 dollars but overall, we’re forced to admit 2299 dollars works out as the next major point of interest, a price level where “normal rules” again mandate some volatility should be expected.

If it all intends go wrong, the earliest warning signal looks like the yellow stuff trading below 2028 dollars as this allows reversal to an immediate 2016 with secondary, when broken, calculating at 1995 dollars. To be blunt, if this occurs, it could also tumble to 1956 with painful speed as the price attempts to mimic what happens to over-enthusiastic AIM shares.

For the present, the Big Picture is being quite serious, suggesting the 2300 level should be treated with respect. It’s a “Higher High” thing! 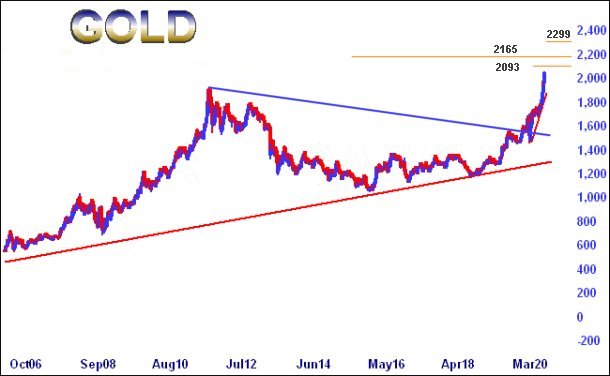 FTSE for FRIDAY Another weekend, another Grand Prix. Hopefully less boring than last weeks insipid Silverstone, a race which stored all the excitement until the final lap, when Louis Hamilton proved why he’s world champion! The climactic ending, unfortunately, did follow the script for the childrens cartoon “Cars”!

Also following a script is the UK stock market. Unfortunately, it’s possible the script is in a language no-one can read as the market is producing some incredibly illogical movements presently. The low this week of 5856 points actually did make a lot of sense but what’s occurred since is rather confusing.

Near term, if the index makes it below 5980 points, we’re calculating a visit to 5924 is expected with secondary, if broken, at 5853 points

This secondary is troublesome, slightly below Mondays dip and presenting the risk of negative news driving the UK index down to 5630 or lower. Visually, the tightest stop is at 6,080 points.

The other side of the coin speculates what’s possible, should the FTSE manage to claw its way above 6045 points. Apparently we can calculate an initial ambition at 6083 points with secondary, if exceeded, up at 6158 points. If triggered, the tightest stop looks like 5978 points.

Have a good weekend. 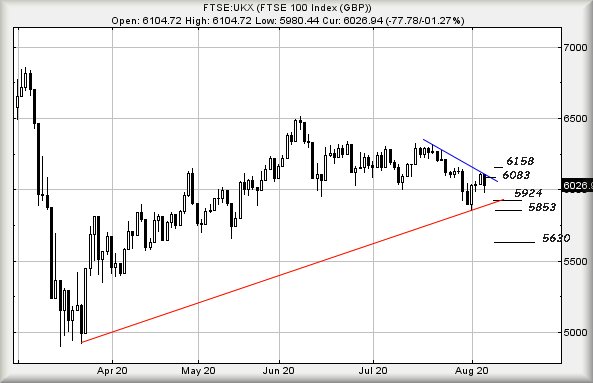