#Brent #DAX When we last reviewed Aston Martin back in January (link) we proposed a pretty foul drop potential of 170p eventually. As the share was trading around the 4 quid level, such a drop ambition appeared positively insane. But with Covid-19, the mighty fell and in Astons case, our 170p was to prove a brief 1 month moment in time as the market had a greater punishment in store.

The share price also supplies a pretty solid example of what we mean, when warning of a movement breaking target on an initial surge. In this scenario, a break, especially closure, below a target (in a dropping price example) tends nullify any “what happens next”, if the target level given is a secondary. In plain English, anyone planning a super bounce from 170p was liable to be disappointed as any rebound was liable to prove fairly short lived. This sort of thing occurs too often to be ignored with the result we rarely trust any share (in a falling market) when a major drop target is broken.

There is an important caveat.

What about if the target is broken in the first second of trade? Should this occur, we pay very close attention to what happens next, thanks to opening second downward spikes often being the harbinger of surprise price recovery. Our rule of thumb allows 90 minutes for a price to exceed the level at which the market is showing the day opening at. If this is the case, continued recovery is probable.

As for Aston Martin, the share price certainly has some issues as it’s presently trading in a region where we can calculate “Ultimate” bottom at 20p. We’re unable to calculate below such a level and suspect below 27.5p shall signal, hopefully, a final surge downward. However, there’s a chance the recent low of 27.5p shall be deemed “close enough” to indicate some residual strength in the price, resulting in the immediate situation where recovery next exceeding 40p should prove capable of returning the price to the 55p level initially. If exceeded, our longer term secondary calculates at 87p and realistically, we shall require stirring the tea leaves again at such a point.

Closure above 87p does certainly allow 142p to make an appearance but we never trust price targets where the calculation dumps a share price in the middle of a prior gap movement. We’re unable to think of a single instance when this sort of scenario proved viable as a miracle recovery will generally ‘cover the gap’ with a flamboyant movement. Or fizzle out completely. 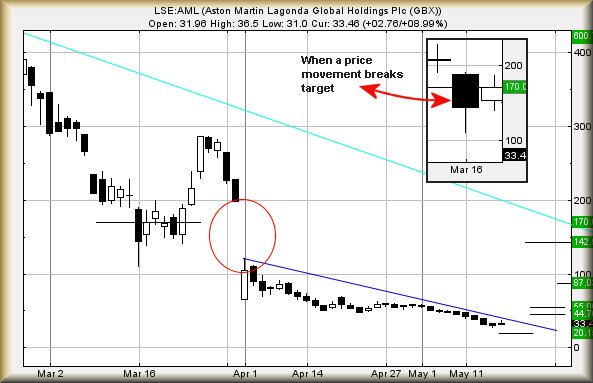