Some light amusement can be had by visiting the “Controversies” section of HSBC’s Wikipedia page. Basically, it appears difficult for a scandal to roll past the bank without someone uncovering their involvement. Even the recent German coal mining flap, now dropped by the media, reveals HSBC made loans to the miner. As they were part of a consortium of 25 bankers financing multi billion Euro loads, more important questions would deserve being asked, if they were NOT involved.

Another aspect of HSBC provided a surprise, though it really shouldn’t. The company was founded in 1865 by a Scottish bloke, continuing a tradition of an irrational number of large institutions being able to trace their roots back to ex-pats from the Edinburgh banking community. HSBC are regarded as one of the worlds strongest banks, a detail confirmed in 2007 when the financial crisis was starting to smoulder. Required by the UK treasury to increase their available capital, the company immediately transferred £750 million to London, along with lending £4 Billion to other UK banks!

However, despite a stonking CV, HSBC share price has tended remain in the doldrums, effectively matching the test of the banking sector. However, with share price movements this year, it appears this homage to mediocrity may be changing.

Elsewhere in Europe and the US, when share prices (and index values) start exceeding their pre-pandemic highs, it has invariably proven as a signal for happier days ahead and in the case of HSBC, it has closed – and stuttered – at the 600p level, visually confirming this is probably a fair trigger.

Movement above 600p looks capable of provoking gains to an initial 635p with secondary, if bettered, calculating at a sane looking 750p. The share price has an obvious downtrend since 2006, one which we’re unable to arithmetically provide a collision zone for the share price. If we’re honest, it’s already the case a distant looking 918p works out as a seriously long term target, hence a suspicion this important looking Blue downtrend shall prove to be a footnote in history.

For everything to go horribly wrong for HSBC, their share price needs to close a session below 533p to utterly foul all the foregoing calculations. 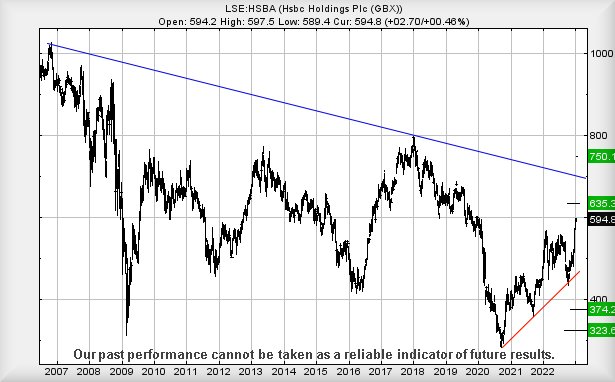 SUCCESS above means both FAST & SLOW targets were met. ‘CESS means just the FAST target met and probably the next time it is exceeded, movement to the SLOW target shall commence.

Our commentary is in two sections. Immediately below are today’s updated comments. If our commentary remains valid, the share can be found in the bottom section which has a RED heading. Hopefully, this will mean you no longer need to flip back through previous reports. HYPERLINKS DISABLED IN THIS VERSION

Please remember, all prices are mid-price (halfway between the Buy and Sell). When we refer to a price CLOSING above a specific level, we are viewing the point where we can regard a trend as changing. Otherwise, we are simply speculating on near term trading targets. Our website is www.trendsandtargets.com.

UPDATE. We often give an initial and a secondary price. If the initial is exceeded, we still expect it to fall back but the next time the initial is bettered, the price should continue to the secondary. The converse it true with price drops.

We can be contacted at info@trendsandtargets.com. Spam filters set to maximum so only legit emails get through…

Further movement against BALFOUR BEATTY ABOVE 371.4 should improve accele ……..

In the event of MAN enjoying further trades beyond 246.1, the share shoul ……..

Target met. Further movement against EasyJet ABOVE 470.7 should improve a ……..

All Glencore Xstra needs are mid-price trades ABOVE 585 to now improve a ……..

In the event of Greggs enjoying further trades beyond 2702, the share sho ……..

Continued trades against HSBA with a mid-price ABOVE 597.5 should improve ……..

In the event of British Airways enjoying further trades beyond 166.06, t ……..

All Intercontinental Hotels Group needs are mid-price trades ABOVE 5724 t ……..

Continued trades against IPF with a mid-price ABOVE 82.9 should improve t ……..

Target met. Further movement against Oxford Instruments ABOVE 2370 should ……..

We allow Google to place adverts on our site. They generate income to fund this ‘free’ info.

A huge thanks to those folk who find adverts of sufficient interest to click on.