#FTSE #GOLD Suddenly the outlook for the future became cheery. Unfortunately, nothing to do with the markets but instead, the local doctors phoned, telling when to turn up for an anti-Covid jag. The thought of “normality” was dashed with a prompt reminder the rest of the country also needs stabbed by a steely eyed, unsympathetic, nurse, this liable to take another 3 months. It may be assumed nurses with needles are a personal nightmare. It’s doubtless the case many folk going through chemo retain such a memory, and of course it’s absolutely nothing to do with the nurse. Some women just like seeing grown men terrified…

The FTSE appears to be exhibiting similar terror, almost behaving as if it faces an injection of misery. Since the start of 2021, the market spent January in a slow and steady decline with conventional logic suggesting ‘The Big Picture’ says weakness below 6430 risks driving reversal to an initial 6207 points with secondary, if broken, around the 6016 level. With the index presently trading around 6503 points, very little work is required to present a new Lower Low along with the prospect of some trouble. The market requires above 6850 to negate such a scenario.

We’ve been anticipating an outbreak of reversals, due to companies releasing some horrific income levels for last year. The most recent, Royal Dutch Shell, proved quite sneaky.

They announced record losses, choosing to balance this with an (astounding) announcement of an increase in dividend. Essentially, they were suggesting “yes, 2020 was dire but we’re thinking of the future now”. As a result, instead of a 20% hammering, the share price reversed by just 2% and resides in an area where we’ve even hope for some sort of bounce. But if it closes below 1297p, things risk going wrong rather fast as there’s a real risk of the price losing 20% from current levels.

It shall be curious, if this pattern continues as further companies issue results. I certainly throws a spanner at our belief the market faces a thrashing, thanks to lack of income from 2020.

Returning to the FTSE, near term above 6554 has interesting potentials, allowing movement to an initial 6598 with secondary, if exceeded, calculating at 6654 points. If triggered, the tightest stop level looks wide at 6500 points.

The alternate (and visually more likely) near term scenario allows traffic below 6448 to spell trouble. A triggering movement like this calculates with the potential of reversal to an initial 6411 with secondary, if broken, down at 6388, along with a (almost certain) rebound.

Have a good weekend. It’s only 50 days until the F1 season kicks off in Bahrain. 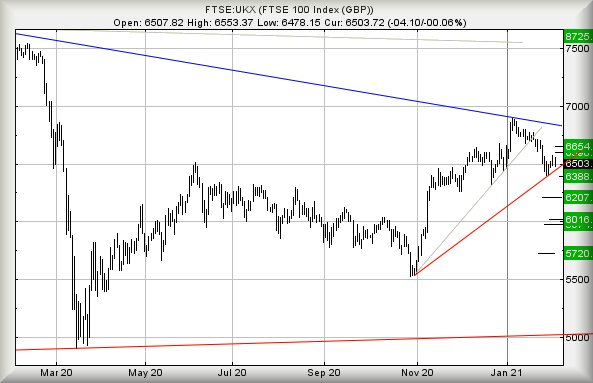