#Gold #Nasdaq The household menagerie sometimes gives surprising inspiration. Living in the country, it’s been easy to become immune to the dogs chasing (and never catching) deer, pheasant, squirrel, ducks and frogs, and the sodding black cat. But what happens, when one of the dogs finds an animal which doesn’t run away? For 90 minutes, from 2am, a Golden Retriever panic barked in the forest behind the house, evading all forms of bribery as we attempted to capture her. Eventually, the torch highlighted a dark object on the forest floor which was the focus of the utterly berserk animal who, in reality, was probably having the time of her life.

A hedgehog had curled into a ball, opting to ignore everything going on. The poor animal was doubtless unaware the dog had excavated the soil and was about to push it in. Only my intervention saved it, so the dog swiped the hedgehog with a paw, rolling it down the hill, straight over the cliff to the garden below. The dog rushed down to the lawn and was promptly marched into the house. Meanwhile, the hedgehog unwound and set about exploring new terrain. It was 4am when I got to bed.

But the hedgehog gave pause for thought. A beast which didn’t run away, just weathered the storm? Quite a few shares have been exhibiting such behaviour since the pandemic price drop in March.

Inchcape doubtless will be experiencing a year not worth remembering, yet its share price movements in the last 7 months have not proved noteworthy, instead the price emulating the hedgehog. Their UK operations will doubtless be experiencing identical trauma to the rest of the industry and unfortunately, it’s likely their operations in the other 31 countries in which they’ve a presence will be experiencing similar vile market conditions. We’re inclined to anticipate the worst for Inchcape.

Visually, there’s a strong implication of weakness next below 400p forcing reversal to an initial 265p with secondary, if (when) broken at a bottom of 62p in the longer term. To be blunt, the price is already trading in such frigid territory and we wonder if their results this November shall provoke a swift reversal. Already, we’ve two quite distinct arguments favouring 265p as some sort of bounce level but we’d warn, should the price manage below such a level, there’s an enhanced risk of future reversals until the lows of 2009 are again challenged at an ultimate bottom at the 62p level.

Only in the event of Inchcape exceeding 570 shall we feel any recovery may be genuine as this allows for surprise moves to an initial 677 with secondary, if exceeded, at 784p. We lack optimism. 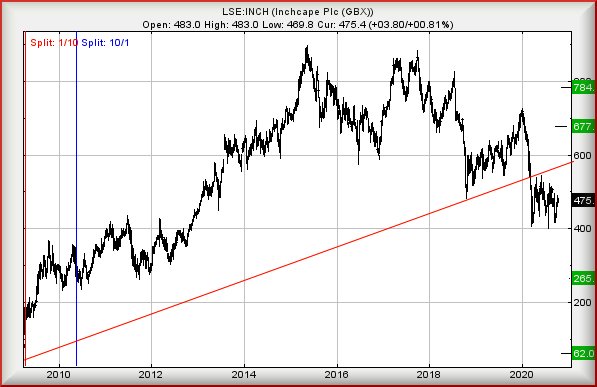