Laura Ashley #Gold #SP500 It’s funny how a dislike for a share can be formed. In the case of Laura Ashley, it was the case of owning a cottage built in 1702, combined with the lethal mix of a girlfriend and a fairly local Laura Ashley store. Neither the house nor the girlfriend remain in my life, only a lifelong distain for anything from “Laura Ashley”.

However, the share price appears to be making an attempt to extract itself from an area where a bottom of 0.57 was essentially “best guess” for the future. As the chart highlights, some miracle has taken the price through the very obvious downtrend since 2015. Now, it resides in a zone where above 4.01p suggests continued recovery to 4.35 can be hoped for. Better still, our secondary if such a point exceeded, now calculates at 5.35p, a level where the visuals indicate it risks some hesitation.

To bring some sanity to the conversation, absolutely nothing is suggesting a return to prior highs is possible. However, it is certainly puzzling to see the share extract itself from the controlling downtrend with such flamboyance, especially as the offer is being reported at just 2.748 per share. 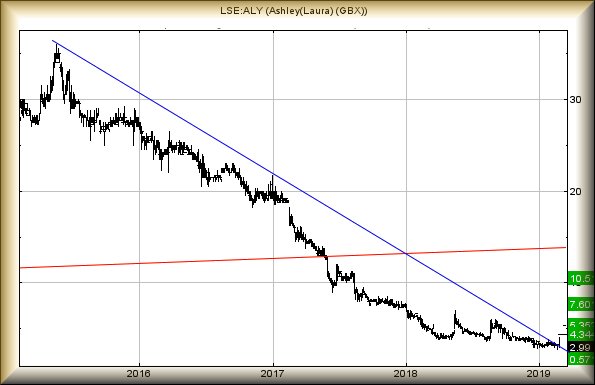